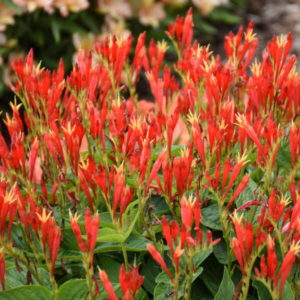 We are pleased to introduce a new Spigelia to our lineup! ‘Little Redhead’ quickly became one of the most popular additions to our catalog, and we expect similar interest in ‘Ragin Cajun’. Compared to ‘Little Redhead’ which is a deep red, ‘Ragin Cajun’ has orange red flowers, has more of a rounded habit, and is more floriferous. Attracts pollinators like hummingbirds and is a native woodland perennial, although it grows well in both sun and shade. From Tony Avent from Plant Delights Nursery.

Spigelia is underutilized in the landscape due to limited availability, but it’s poised to make an explosion in popularity. Why? It’s a very versatile perennial-it grows naturally in either sun or shade. This perennial can be found growing in the wild in woodlands and along streambanks throughout the Eastern United States. It’s wildly popular among wildflower enthusiasts and highly sought after.