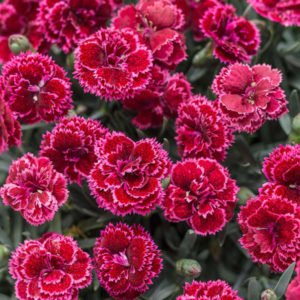 Members of the Dianthus FRUIT PUNCH® series share the following traits: semi to fully double, fragrant flowers, and good heat and humidity tolerance. Flowers appear in early summer, and a quick shearing after flowering will encourage them to rebloom in early fall. FRUIT PUNCH® Dianthus are just the right size to edge the front of the sunny border and use in combination containers.

In the carnation family, Dianthus cultivars deliver gorgeous single, semi-double, and fully double flowers. Singles tend to deliver more flowers while doubles are significantly larger, sometimes more than twice the size. Singles also tend to grow quicker and can appear like a carpet in the landscape at maturity.